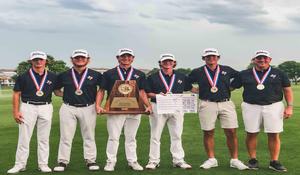 The Argyle Eagle golf team won the Class 4A state championship on Tuesday in convincing fashion. The Eagles won their first title since 2017 and finished 22 strokes ahead of second place.
Gaven Lane was the highest Eagle finisher, taking second overall. The event was shortened on the second day due to inclement weather at the Plum Creek Golf Course in Kyle.

"I'm so happy for my seniors," Argyle coach Cody Vanderford said. "It's great that they got to end their careers with gold medals! We have known all year that we were one of the best teams and we played like it for the entire year. They were unflappable at the state tournament and it was a joy to coach them."
Congratulations to Gaven Lane, Zane Griggs, Blake Kelly, Justus Christman, Ethan Payne and Coach Cody Vanderford!
Click here to read more in the Denton Record-Chronicle.