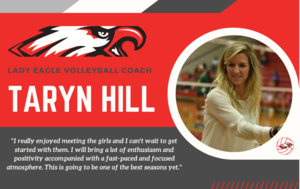 The Argyle ISD Board of Trustees approved the hiring of Taryn Hill to lead the Lady Eagles' volleyball program.

Hill previously served as an assistant coach at Frisco Liberty for the past four seasons. During that time, Frisco Liberty reached the Class 5A area playoffs three seasons and earned district championships in 2018 and 2019. Frisco Liberty was named the coaching staff of the year in both of those seasons.

Hill also has ties to Argyle. She coached at Liberty under former Argyle Lady Eagles' head coach Clark Oberle and her brother Max Baker played for the Eagles' football team and graduated in 2006.
This week, she had the chance to meet with the Lady Eagles for the first time.
"Meeting with the team this week solidified that I am in the right place at the right time," Hill said. I felt very welcomed by the staff. I really enjoyed meeting the girls and I can't wait to get started with them. I will bring a lot of enthusiasm and positivity accompanied with a fast pace and focused atmosphere. This is going to be one of the best seasons yet."
She began her career as a volleyball head coach at Corrigan-Camden from 2013-2015 and led the team to the Class 4A playoffs in 2014. Hill also served at Pearson Middle School in Frisco ISD as the Girls' Coordinator and was the head coach of volleyball, cross country and track. She has eight years of experience in public education as a coach and teacher.
"I think she has incredible experience from very successful programs," Argyle ISD Athletic Director Todd Rodgers said. "She is the missing link for helping us transition soon to the move to 5A. I think she brings a wealth of leadership and success to our program."
Hill is a graduate of Stephen F. Austin and Carrollton Newman Smith High School.